We’re moving (most of the) study groups online during shelter-in-place. 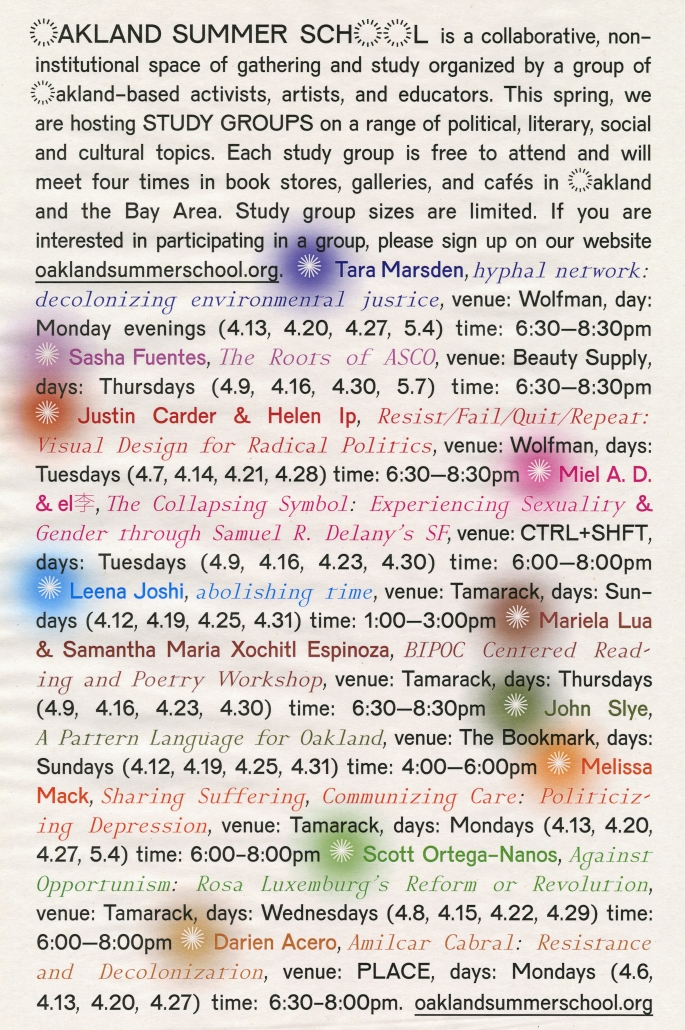 This reading group centers the writing and perspectives of Black/Indigenous/People of Color authors and thinkers approaching “environmentalism” through a racial and social justice lens, using anti-capitalist and anti-imperialist frameworks for addressing climate change, land management, clean water access, etc. Some questions we might explore: What is our relationship to stolen land? How does the “Anthropocene” narrative obscure differences in responsibility for manmade climate change? What alternative futures can we dream together?

TBD: The Roots of ASCO

An exploration into the background and political climate that birthed the members and work of the East L.A based art collective ASCO. An in-depth lecture about life in the 1960s-1970s as a chicanx in Los Angeles i.e: the Chicano Moratorium, socioeconomic infrastructures, political activism and how ASCO’s existence rejected the stereotypes of chicano’s in art and society.

Samuel R. Delany is one of the foremost writers of SF, with a career which spanned from 1962, when at age 20 he published his first novel, four Nebula awards, two Hugo awards, Professor Emeritus at Temple Univeristy, featured vastly in studies on early AIDS writing and Black Queer writers and ongoing prolific work as a literary critic. In this study group, we will look reflexively into Delany’s SF as a project beyond LGBT representation – instead, as a metacognitive practice of altering perception through an affective logic. We will look at Samuel R. Delany’s writing as a process of perceiving one’s surrounding architecture reflected in the architecture of the inner; iterations of his writing as travel journals, descriptions and reflections on the city, to the discursive. In this way, we will culminate in a subtle, private interrogation of our own sexual responses, through Delany’s use of difference as an unending improvisation of differentiation – the study group will see in themselves in terms of aesthetics, gender, and sexuality where queerness has been, and where it has yet to go…

We’ll gather to think together on the construct of time under capitalist, white supremacist, colonial/imperial, ableist, and heteronormative conditions. The limitations, effects, and possibilities of time will be explored through short readings, video/film viewing, generative writing practices, and group discussion. What are our own definitions of time? Our communities definitions of time? How can our art, our care for ourselves and others, and our realities help redefine our experiences of time?

This will be a slow working group, a listening group — designed to be a mutually supporting exploration of depression under capitalism. Gathering will be our first method. We can work lightly toward developing a politics of depression: to, as Mikkel Kraus Frantzen puts it, “collectivize care, externalize blame, communize care.” Gathering, we may foster our capacities for being with each other in life-giving ways. Possible texts we can draw from include Ann Cvetkovich’s Depression: A Public Feeling, Sophie Lewis’s Full Surrogacy Now, Mark Fisher’s Capitalist Realism, Audre Lorde’s “Uses of the Erotic,” adrienne maree brown’s Emergent Strategy, Sara Ahmed’s The Promise of Happiness, ourselves, each other.

Mariela and Samantha will be leading a poetry writing workshop that focuses on tenderness, ancestral ties, and the qualities of care. Referencing text from Lucille Clifton, Janice Sapigao, Norma Lilliana Valdez, Octavia Butler and stories from Lies: A Journal of Materialist Feminism, Octavia’s Brood, Her Body and Other Stories, and Whereas by Layli Long Soldier, we will be exploring the interpersonal through our individual lenses. This reading and writing group is BIPOC, QTPOC, and Femme centered only, and we are excited to go on this journey together!

A Pattern Language for Oakland

A pattern language, in the words of the mathematician Nikos Salingaros, “is a social geometric statement…it is the social life of a community and geometry, certain geometries help certain social functions.” The statement is in relation to architectural and urban theory and is directly inspired by the seminal text “A Pattern Language” which was collaboratively written by a group of architects in 1970’s and led by the influential architect Christopher Alexander. We’ll be using this text as a jumping off point to explore and expand on aspects of built environments which the architects behind the work categorized under patterns they identified within towns, buildings, and construction. Additional space will be given for participants to bring in supporting text, imagery, materials, smells, sounds, etc. that connect with and aid our regional understanding of the Bay Area. All of this will be in an effort to find a shared language for creating a local vision and understanding of what is needed to have a nourishing life in Oakland.

In this 4-week reading group we will come together to critically consider four landmark writings on resistance by revolutionary agronomist Amilcar Cabral. Compiled in Resistance and Decolonization, Cabral investigates political, economic, cultural, and armed resistance in four essays drawn from his experience in the anti-colonial struggle in Guinea-Bissau and Cape Verde. We will read these four pieces and collectively grapple with their significance both historically and actually for our own movements towards decolonization and more just and liberated futures. Each piece is around 20 pages.

Join us for a non-hierarchical, inclusive reading and discussion of Rosa Luxemburg’s seminal work, Reform and Revolution. Together, we will explore the divisive yet pertinent issue of reform vis-a-vis revolution through this classic and inspirational text.. but without dogma, party agendas, infighting, and “theory-flexing”.. instead, we will place the unifying principles of love and anti-fascism at front and center. No previous familiarity with the text and/or revolutionary history is necessary; anyone with an open political consciousness is welcome to participate.